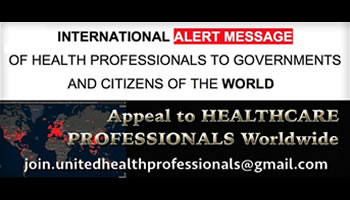 I came accross an open letter addressed to "governments and citizens of the world", signed by hundreds of health professionals from various countries. It denounces the non-science behind the measures taken as a response to the ‘pandemic’, the many lies of the WHO, financial ties, etc.. amongst other things.

All health professionals who agree are invited to sign by emailing This email address is being protected from spambots. You need JavaScript enabled to view it. with their first name, last name, profession and country. Please feel free to share massively around you so that many more can be aware and join.

It is a very long letter so here are some highlights:

We, health professionals, across several countries in the world :
We say : STOP to all crazy and disproportionate measures that have been taken since the beginning to fight SARS-CoV-2 (lockdown, blocking the economy and education, social distancing, wearing of masks for all, etc.) because they are totally unjustified, are not based on any scientific evidence and violate the basic principles of evidence-based medicine.

We are told :
-"But, SARS-CoV-2 is very contagious" and we answer : IT'S ABSOLUTELY FALSE. This claim is, moreover, rejected by internationally renowned experts.

We say : STOP to these crazy measures also because of their catastrophic consequences that have already started to appear : suicide of people as it was reported in China, development of psychiatric disorders, paralysis of the educational path of pupils and students at the university, negative impacts and dangers on animals, neglecting other diseases (especially chronic) and an increase in their mortality, domestic violence, economic losses, unemployment, major economic crisis [...], serious consequences on agriculture, destabilization of countries and social peace, risk of wars.

We say : STOP to censorship of experts and health professionals to prevent them from telling the truth.

...we say : separate the screenings from the cases and stop confusing them.

We share the opinion of experts who denounce the fact that no distinction is made between people who died from the virus and people who died with the virus (with co-morbidities), the fact that the cause of death is attributed to SARS-CoV-2 without testing or autopsy and that doctors are pressured to add COVID-19 to death certificates even if the patient died from other reasons.

Protocols must be changed as they have resulted in a high number of deaths.

...we say : STOP the obligation of screening tests because of this unreliability...

...several scientific studies have shown a link between excess in hygiene and the development of diseases such as allergic diseases, autoimmune diseases, inflammatory diseases or certain cancers.

...there is no scientific evidence they [masks] are effective in reducing the risk of SARS-CoV-2 transmission. [...]
Therefore, we say to governments : STOP these illegal and dangerous measures of mandatory mask wearing.

There is no scientific evidence to support the disastrous two-metre rule.

...the major problem of the WHO is that, since several years, it is 80% funded by companies (especially, pharmaceutical laboratories) and private donors (especially, a very well-known foundation) and there are many scandals...

60,000 cancer patients could die in the UK because of a lack of treatment or diagnosis [...], 12,000 people could die per day by the end of the year as a result of hunger linked to COVID-19 measures [...], the number of cardiac arrest doubled in some countries, companies go bankrupt, 305 million full-time jobs have been lost - affecting especially women and young people [...], a man is dead because of mask in the USA, etc...

We say to governments : EVERYTHING must return immediately to normal.


You can view/download the full letter here: