The AIDS Hoax and the Contagion Myth

in The World System
Views: 218 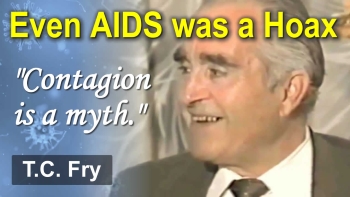 Yes, you read that right! AIDS was a hoax. It is not what we have been told. HIV does not cause AIDS. They lied about that as well.

Here is an old interview of Dr. Terry C. Fry, by Dr. Henry L.N. Anderson. T.C. Fry was a man far ahead of his time, who had interesting opinions on viruses, vaccines, immunology, the germ theory, allergies, herpes etc..

"What are called viruses are always dead and incapable of any act whatsoever. Dead matter may be acted upon but never acts of itself”
“Contagion is a myth — a medical appropriation of ancient misconceptions.”

T.C. Fry is the author of "The Great AIDS Hoax" (1990). This book asserts that AIDS is not new; that it was deliberately “concocted” from old diseases by the Centers for Disease Control and drug cartels; that it may be the third and fourth stages of syphilis under a new name; that it is not caused by a virus and is not contagious. Then what does cause it? “Drugs and poisons”, especially immunodestructive drugs. And why does it kill people? On page 69 it says,

“Most of the deaths of so-called AIDS are from massive chemotherapy and drugs.”

“Almost all deaths attributed to AIDS are confirmed drug users.”

These are radically unorthodox viewpoints that present the medical and pharmaceutical establishments, and their allies in the media, as profit-driven and utterly corrupt.

THEY HAVE LIED TO YOU (and it should be clear today that they still do).
TIME TO BREAK THROUGH THE MYTHS!

Book summary "The Contagion Myth. Why Viruses (including "Coronavirus") Are Not the Cause of Disease", by Dr. Thomas S. Cowan and Sally Fallon Morell

Video "What Really Makes You Ill?"